The United Cubs Tournament in Tichakunda took place on 3rd of December 2016. Tichakunda (www.tichakunda.org) is an Early Childhood 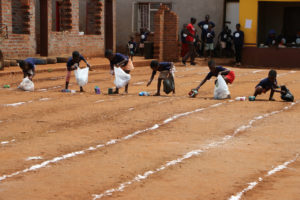 Development Full Day Care Centre in a squattercamp in Harare, Zimbabwe. It caters for 380 orphans and vulnerable children in the community. The children are in the age between 3 and 6 years and 75% of them have lost one ore both parents. Some are unter care of their grandparents and more than 30 are living in Tichakunda together with the founder of the centre Winnie Masaure. The school gets no support from the government and all the teachers, the kitchening and the gardening staff work voluntary since 2005. 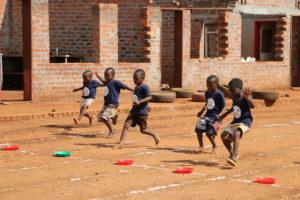 For our United Cubs Tournament we invited the children who are going to graduate in December 2016 with a short letter. So these children were in the age of 5 and 6 years. We also invited the orphans who stay with the founder of Tichakunda, Winnie Masaure, and also the volunteers children. The volunteers had cleaned the place, prepared a race track with sand and prepared also some posters which said “Play for a smile” or “United Cubs thank you”. Our day started at 9:30 a.m. About 220 children arrived in time (some had arrived already at 8:00) and the pre-school secretary started to form 10 teams. Each team got two or three teamleaders (teachers, kitchen staff, cleaning staff, some of the bigger orphans or teachers children). After that we startet do distribute the t-shirts to each team and every team got a wristband in a different colour. The teamleaders did a great job, the gathered their team and motivited them to get number 1.
Irene Musonza, who is the pre-school secretary led the races. For each race she explained the participants the rules of that particular race or showed them, how to do it (f. ex. the skippingrope race or the frogg race, which looked very funny).

Our first race was a 50m-race and the results were taken down at the result desk. The teams cheered for their teammembers and celebrated the winners. Specially the teamleaders were cheering and dancing and motivated the childr 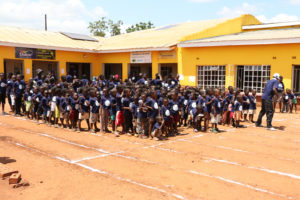 en to follow them. During the day we did furthermore beanbag-races, sackraces, egg-and-spoon-races, wheelbarrow-race, shopping-races, pegraces, tyre-races, frogg-races, bead-races and skippingrope-races.
Inbetween my zimbabwean host Irene Holland arrived, she had brought all the stuff which coudn’t fit in my car in the morning. When she left, she switched on the present numer one hit “Mdhara vachauya” and all the kids and adults were running to the car to dance. It had been a moment full of joy. 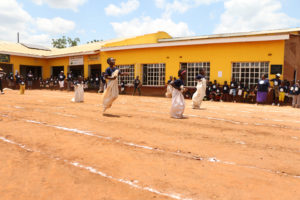 For lunch we had rolls with polony which were prepared by some volunteers. The children enjoyed the sandwiches and also the apples which I had bought as a dessert. Furthermore the kitchen staff had prepared a big pot of popcorn, which wie distributed to the children as well. 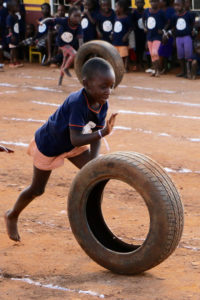 After lunch we continued the races and ended with ropepulling between the different teams. At the end the volunteers went for a sackrace which had been fun for everybody on the place.

We closed the tournament with an awards ceremony for the 10 children, who did best. They got a picture book, which I had bought as a price. We closed with a price giving for all the children, everyone got some sweets. Before dismissing the secretary and also the teamleaders activited the children to sing different songs and to celebrate the day. Children and volunteers said again and again, that this was a very special day, that they really enjoyed and that they will never forget this day 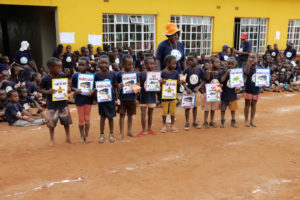